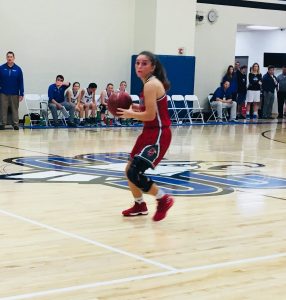 The Lady Falcons opened their season with a first round loss to Harrisonville, 34-49 in the Summit Christian Tournament.  The Falcs started off the game with cold shooting, falling behind 5-12 in the first quarter.  Their defensive effort in the second quarter helped them get back into the game, trailing 17-18 at half.  Unfortunately, The Lady Falcs offensive troubles continued in the second half as Harrisonville stretched their lead, ultimately winning by 15.   Though the Falcons lost, it was great to see the dynamic backcourt duo of Chase Siedlik (Sr.) and Karli Schnakenberg (Jr.) return to action.  The Falcons will play St. Michael’s on Wednesday at 4:00 in the Summit Christian Tournament.