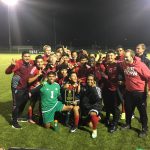 In a battle of undefeated conference rivals, the Falcons came out victorious with a rampant 7-0 victory over Kansas City Christian.  The game started with both teams creating chances.  The Falcons struck first with an early goal from Favian Valenzuela, and immediately followed it up with a penalty won from a foul on Valenzuela.