We’re excited to welcome Hy-Vee as an official partner of the Falcons athletic website! The support of local businesses not only contributes to the Van Horn athletic department, but ensures Falcons Nation has the most up-to-date news, scores and photos online. Show your support of Hy-Vee by visiting them at 1525 E 23rd St S. Thanks to Hy-Vee for their 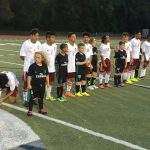 The #7 ranked Van Horn Falcons beat conference rivals, Summit Christian, 3-0 at the Horn on a chilly, wet, Tuesday night.   The Falcons faced a resolute Summit defense that routinely had nine players behind the ball.  If not for spectacular goalkeeping from Summit Christian, the Falcons would have scored many times over.  The Falcons 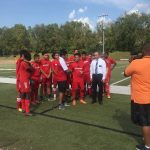 Favian Valenzuela (Senior, Forward) is leading the 16-0 Falcons with 20 goals.  He was honored yesterday with HyVee’s Player of the Week. BY PERRY GREEN