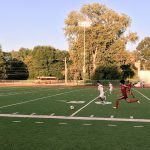 The Falcons defeated the East Bears 3-0 to maintain their undefeated start to their season.  The match between two state-contenders will likely foreshadow the district championship match at the end of the season.  The Falcons used their technique, speed, and tactical discipline to chip away at the Bears.  East was a physically impressive, taking away